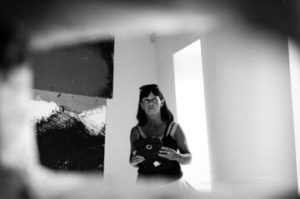 Melanie Thompson is an interdisciplinary artist/educator. She has initiated and been commissioned to create original art projects involving installation, performance and collaboration all over the world. She taught at Dartington College of Arts -where she also trained- and Falmouth University and was a visiting tutor at Nordisk Theatre School Denmark and Sheersburg College Flensburg Germany.  She has travelled widely, performing, teaching and as artist in residence in many countries including Denmark, France, Norway, Spain, Italy, Canada, Israel, Poland and Germany. Her company Intimate Strangers created major touring shows and was committed to developing work in collaboration with an eclectic range of practitioners.

She formed “The Zwillinge Project” with artist Kirsten Lavers and created 10 episode/performances in response to a variety of sites, ranging from a hotel in Hull to a week long walk around the city of Bristol examining the issue of homelessness, culminating in a book.  She was co –producer/ curator of Palace Intrusions a year long series of performic interventions from commissioned artists around Wells Palace, Somerset culminating in large community performances. Throughout her career she has taught and facilitated people of all ages and backgrounds in performance, dance, installation, writing and site-specific practice and has been involved in curating/producing a series of high profile public art projects.  Most recently she has worked closely with Refleksion Teater in Aarhus Denmark, creating performances, film, teaching workshops and working as a researcher and documenter. She also initiated a 3 year project called Scaping the Land in Somerset, creating performances and films in relation to the unique landscape of the Somerset levels and has completed a 2 year project in a Somerset Orchard culminating in an installation and a series of performance events.