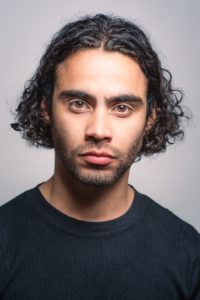 I always enjoyed acting but, growing up in South London, I didn’t think it was a possible path for me. I got involved with gangs and was sent to prison in Bristol. Then things changed. I started weekly drama lessons with Jesse Jones through a partnership with the Bristol Old Vic and they transformed my life. At the end of my sentence I chose to stay in Bristol to pursue a possible new life as an actor.

Outside of work, I was doing loads of acting, but I still didn’t think drama school was for someone like me. I thought it was just for privileged people, but when I was offered a free audition at Mountview I decided to give it a go. Being ‘scouted’ in this way not only removed my financial worries about auditioning, but also showed me that I could fit in at drama school. I was in shock when I was invited to join Mountview’s BA in Acting!

I grew up on a tiny council estate, but there are three very successful rappers from that same estate. It just shows the creativity in those areas: we need to get into those tiny crevices where talent lives. The scouting network is so important for going out there and meeting people like me and we can all benefit from the diversity it brings.

The initiatives which the Judi Dench Fund supports are life changing. Coming to Mountview gave me hope and a heartbeat. I can’t imagine what my life would be like without it.