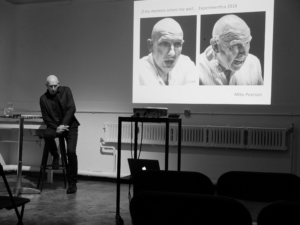 Mike Pearson has been a professional theatre-maker and performer for almost fifty years, working in the UK and internationally, primarily in the fields of physical theatre and devised and site-specific performance, most notably with Cardiff Laboratory Theatre and Brith Gof. He continues to create performance as a solo artist and with senior performers’ group Good News From The Future. Since 2010, he has co-conceived and directed five productions with National Theatre Wales.

He is co-author with archaeologist Michael Shanks (Stanford University) of Theatre/Archaeology (2000).

He is an Honorary Professor at Exeter University and a Professor Emeritus of Performance Studies at Aberystwyth University.