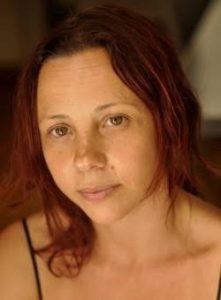 Athina Vahla is an interdisciplinary artist working as a choreographer, educator and researcher. She has created large scale site- specific works including for: the Royal Festival Hall, Tate Modern, ICA, Science Museum and the 2012 London Olympics.

She has taught extensively for various institutions including Central St Martin’s U.A.L, Trinity Laban and as a visiting lecturer for London Metropolitan and Middlesex Universities, The Place, London College of Fashion Hong Kong Academy of Arts, the Brussels Ministry of Dance Education and the State School of Dance in Greece. She has created work for Candoco and Graeae, and collaborated on international projects in Helsinki, Madrid, Venice, Mexico City, Berlin, Washington DC, and Cyprus, Wales, South Africa, and recently Japan. Athina is currently an honorary research associate of the Drama Department of Rhodes University South Africa, and is undertaking a PhD at Middlesex University.  She is has recently created Watermob, a site-specific performance in South Africa, to raise drought awareness and been commissioned by the Kyo company for the Tokyo Metropolitan Theatre in Japan. Athina is currently collaborating with the UK company Imitating the Dog, for an Opera in Utrecht Holland.  www.athinavalha.com