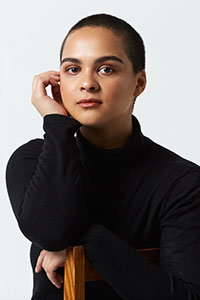 Ameera Conrad has worked internationally as a writer, director, and performer since graduating with distinction from the University of Cape Town’s Drama Department in 2015 as a Theatre Maker (Honours).

She is one of the recipients of the 2016 Theatre Arts Admin Collective’s Emerging Theatre Director’s Bursary and is an alumnus of the 2017 Lincoln Center Theater Directors’ Lab in New York. She is a co-curator, co-writer, and performer in The Fall, which made its international debut at Edinburgh International Festival Fringe (2017) where it received the Scotsman Fringe First Award for Writing, The Stage’s Ensemble Award for Acting, and was Shortlisted for the Amnesty International Freedom of Speech Award. The Fall has performed to sold-out audiences at the Royal Court Theatre (London, 2017), St Ann’s Warehouse (New York City, 2018), the State Theatre (Pretoria, 2018), the Galway International Arts Festival (Ireland, 2018), Melbourne Arts Centre (Australia, 2018), Festival Arts Bordeaux (France, 2018), and the Studio Theatre (Washington DC, 2018). The Fall is nominated for the Helen Hayes award for Best Visiting Production (Studio Theatre, Washington DC, 2018) and was named the New York Times’ Critics Choice (St. Ann’s Warehouse, New York, 2018).

Ameera directed and devised Towers at the Guildhall School of Music and Drama (2019). She also co-wrote the touring production Boxes with Neil Coppen (2019), and starred in Jenna Bass’ short film Sizohlala (2019). She also wrote and performed her solo show, Tales from the Garden at the Edinburgh International Festival Fringe, where she won the Filipa Braganca Award for best solo performance by an emerging female artist (2019).

In 2020 she directed The Royale, at the Guildhall School of Music and Drama, was the assistant director on Pipeline at the Arcola, and directed Kate Spencer Did A Good Thing at ArtsEd.

She is a twice-published playwright, and one of the co-founders of the theatre collective, The Furies, in South Africa. Her work focusses on decolonising the canon of theatre by highlighting the voices of marginalised groups.