The Tropical Origins of Mountview

Celebrating its 75th birthday this year, it’s fair to say that Mountview has seen plenty of changes over the years! Originally founded on an army base in Sri Lanka at the end of World War Two, it’s seen a move back to the UK, the opening of its first building in Crouch End and, most recently, the launch of a brand-new home in Peckham. But let’s take a look back to the very beginning…

Mountview started life on a military base in Colombo, Sri Lanka in 1945. Peter Coxhead and Ralph Nossek had been turned away by the amateur theatre company being run on the base, on the grounds that the club was only for officers – and, as very junior ratings, they were not allowed to participate. 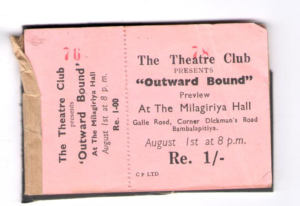 In response, they set up their own group which welcomed people from all ranks, and on Friday 13th of April 1945 ‘The Theatre Club’ was opened. The first production was a staging of Sutton Vane’s ‘Outward Bound’, chosen on the basis that it was the only script available at the time.

“A serious play, and quite time too!”

On opening night, the stage set was still being built right up until the curtain rose – and so, to drown the noise of hammers, the group played the loudest piece of music they could find until the performance was ready to start. This ended up starting a tradition – for a long time afterwards, the Grand March from ‘Tannhauser’ was played before each Theatre Club performance.

“The play is produced by Peter Coxhead, who also had the most sympathetic role of Examiner… He is supported by a capable and sensitive cast.” 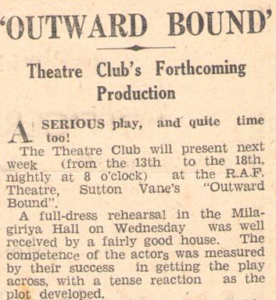 Several plays, revues, concerts and musical evenings were staged during the next eighteen months, before the war in the East ended. That could easily have been the end of it all. But fortunately, the nucleus of original members had already decided to continue with their operations when they returned home to London.