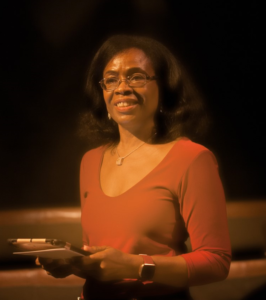 An award-winning producer/director. Pam Fraser Solomon was a senior BBC Drama producer and has directed over a hundred hours of audio dramas.

Her television drama productions include producing EastEnders and Holby City and the development producer for the BBC short film One Night In White Satin. Pam is a documentary producer and was an executive producer of BBC2’s award-winning Moira Stuart In Search of Wilberforce and a script editor for the autobiographical feature film Farming.

Pam has had conference papers accepted for presentation by a number of institutions, including the University of London School of Advanced Study and Les Amis de la Maison Baldwin. Pam trained at Mountview and developed a career in fringe and repertory theatre working for venues including the Sheffield Crucible and Theatre Royal Stratford East.

Pam is currently producing a feature film and also audio productions. She is Chair of Theatre Deli and the Head of MA in Creative Producing at Mountview.